Information about the Heartbleed OpenSSL Exploit

On April 7th, 2014 a vulnerability named Heartbleed was disclosed that affected OpenSSL, a software library that is used by many public and private websites to secure communication between you and the site's servers.

None of our LBCC hosted web sites use the vulnerable versions of the OpenSSL library so no information has been leaked.

We are not requiring a change of passwords on LBCC hosted web sites at this time. However we will continue to monitor the fallout from this exploit on various computer security blogs and if anything changes we will let you know what to do via email and web postings.

We have tested our Linn-Benton Community College owned web sites along with many other sites that students or staff use and, to this point, we have not found any of them to be vulnerable to the Heartbleed exploit.

Google issued a statement about their systems recently and this is from an abcnews.com article dated April, 9, 2014:

A Google spokesperson said in an emailed statement, "The security of our users' information is a top priority. We proactively look for vulnerabilities and encourage others to report them precisely so that we are able to fix them before they are exploited. We have assessed the SSL vulnerability and applied patches to key Google services."

They later added to their statement saying that, "The security of our users' information is a top priority. We fixed this bug early and Google users do not need to change their passwords."

However in a different statement from the site mashable.com on April 9, 2014 they said that it would be a good idea to change your password.

“We have assessed the SSL vulnerability and applied patches to key Google services.”
*Google said users do not need to change their passwords, but because of the previous vulnerability, better safe than sorry.

What we recommend you do:

LBCC Information Services recommends that you change your Google Apps account password, just to be safe, by going to your account settings under your user name or photo in the upper right corner of the browser window and clicking it to open. Once open select 'Account'. 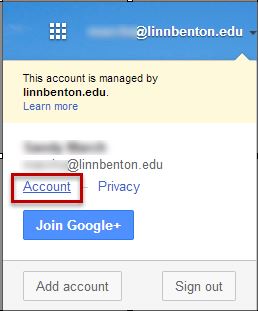 If you decide to change your passwords on any sites you may be using at LBCC or elsewhere we would like to remind you to use secure passwords following best practices such as:
For more details about this issue please see the excellent information at the site http://heartbleed.com. Also if you have a question about a particular LBCC site regarding this vulnerability please call the Information Services Department at (541) 917-4353.
©