Completed in August 2017, the new Healthcare Occupations Center is adjacent to major healthcare providers and education centers. The center brings all LBCC healthcare programs into one learning space, providing greater opportunity for collaboration between programs and sharing of resources for a more realistic learning experience to better prepare our students for healthcare careers. In addition to bond funds, $8 million in State of Oregon matching funds was used to help construct the center. 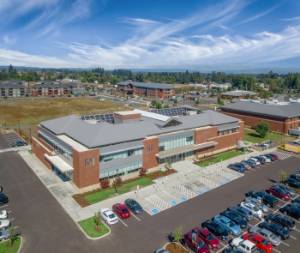 July 2017
A Grand Opening was held Wednesday, August 16 for the new Healthcare Occupations Center. The building is complete with the exception of the walk-in coffee shop, which will be located on the first floor. Program moves should be completed in time for start of fall term.

RFP for moving services is in, and all moves should be completed by the end of summer. With June starts dates, the Diagnostic Imaging and Polysomnographic programs will be the first to hold classes at the new facility. The remainder of Healthcare programs will move in before start of fall term.

April 2017
HOC construction is on track for completion at the end of April. Instructional classroom equipment will be installed in May. Site improvements including paving, stripping and landscaping is in progress and should be completed in May. Diagnostic Imaging program faculty and staff will move into the facility in June to be ready for summer term program start.

March 2017
Interior wall construction is nearing completion, and finishing paint and trim work has begun. Exterior wall masonry and glazing work is also nearing completion. Site improvements such as parking lots and landscaping are scheduled to begin within the month. The project is expected to be fully completed in April. Furniture and program equipment will be moved in after completion. Diagnostic Imaging will be the first program to occupy the building in early summer.

January 2017
Building construction is on schedule to be completed Spring 2017. Diagnostic Imaging is the first program tentatively scheduled to start in the new building summer term, with the remainder of LBCC healthcare programs starting fall term.

December 2016
Construction is on schedule to be completed in Spring 2017. Work on the East Linn Lebanon Center is complete, with renovations done to accommodate the Veterinary Assistant Program move from the Albany campus and work completed on a new security office housed inside the center.

October 2016
Framing is complete. Interior and exterior walls are under construction. Rough-in for inside utilities is underway.

July 2016
The concrete pad has been poured, and structural steel framing work will begin once the pad has cured.

June 2016
Construction progress is being recorded each day and compressed into a time-lapse video that can be viewed on the Healthcare Occupations Center main web page. The project is on scheduled and on budget. Expected completion is spring 2017.

April  2016
The $11.7 million construction contract for the new 42,000-square-foot center was awarded to Triplett-Wellman Contractors. Site preparation and foundation work are being completed, and walls will start to go up soon. The construction progress is being recorded each day, with progress being compressed into a brief time-lapse video that can be viewed on the Healthcare Occupations Center main web page.

The project is on budget. Expected completion is spring 2017.

February 2016
Phase II is out for construction bid, with a timeline to have to the college Board of Education for approval by March board meeting. The college is looking to install time lapse cameras for viewing the construction.

Kip Leonhardt has been hired as project construction manager, and will work with project program manager Lou Tarnay.

December 2015
Phase one site preparation continues. The firm Soderstrom Architects is working on design for Phase II, to be completed in February. Phase II will go out for construction bid after design completion. The HOC is scheduled for completion in February 2017.

November 2015
Phase one site preparation is almost complete. Phase II will go out for construction bid in January 2016. Building construction will start once bidding process in complete. The HOC is scheduled for completion in February 2017.

July 2015
Progress in design continues. The designer has delivered schematic drawings and moved in to the design development phase as we review and approve those. The land sale contract has been reviewed by our attorney, and the college expects the final version for signature.

A groundbreaking ceremony was held Tuesday, August 25 at 9 a.m. on the Samaritan Health Systems campus in Lebanon.

March 2015
After several planning meetings, Soderstrom Architects, a Portland design firm, has provided very early floor plans for the new Health Occupations Center building, which will be constructed on the Samaritan Health Systems campus in Lebanon.

Plans will include future modification to the LBCC Lebanon Center to benefit the Veterinary Assistant program.