'Slice of Americana': Dan and Kaden Segel reflect on days, Knights, LBCC, and the national pastime 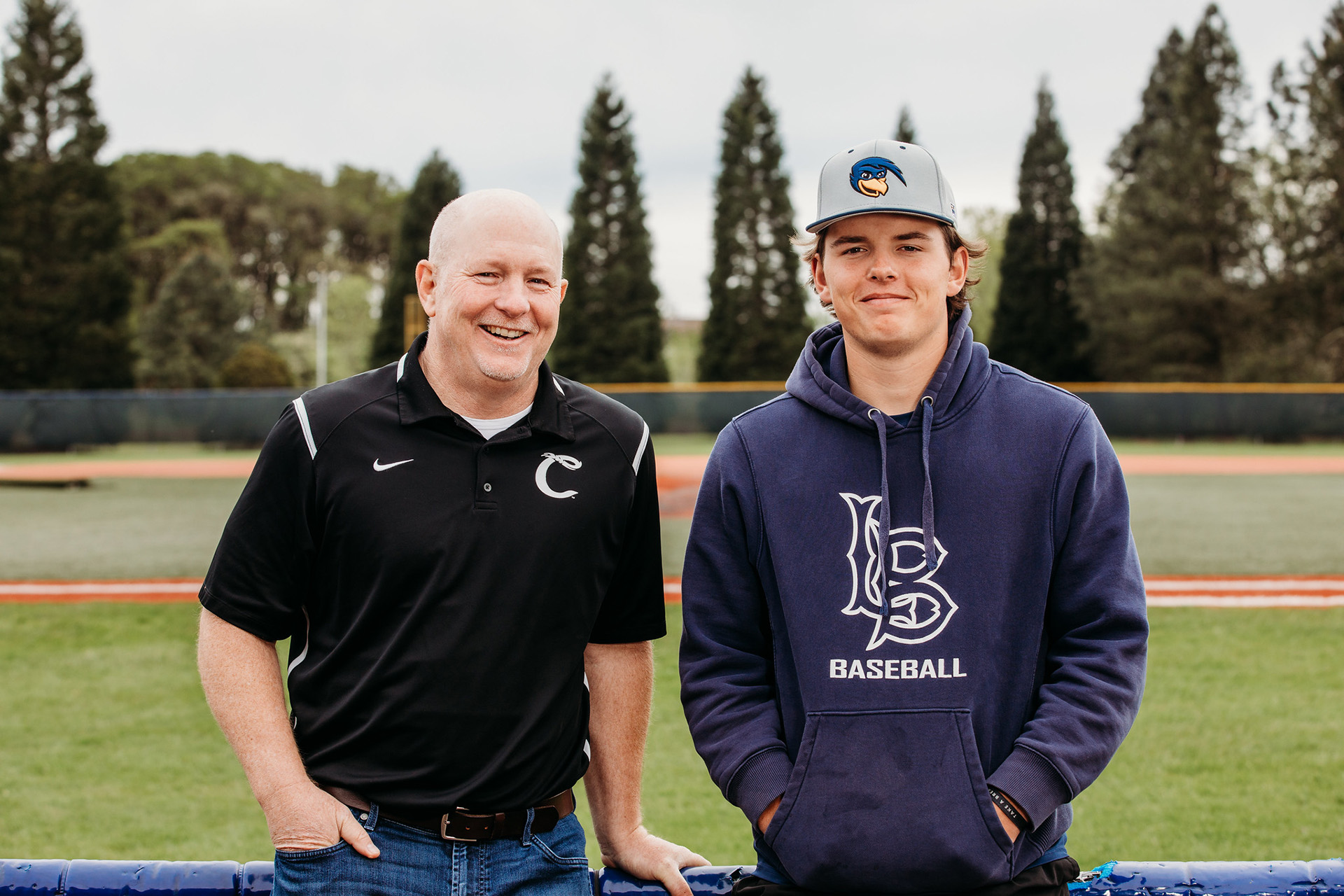 Entertainment options have changed some since Dan Segel was playing baseball for Linn-Benton Community College, back in the mid-1980s.

Video games, cell phones, even other sports, such as soccer, compete for attention from America’s youth.

But Segel, CEO and chairman of the board of the Corvallis Knights, still believes in baseball. And so does his oldest son, Kaden, a freshman at LBCC who just joined the Knights this year as a pitcher.

“It’s a slice of Americana. It’s part of the fabric,” said Segel, who played first base for LBCC’s Roadrunners in 1985-86.

Baseball is an attractive option because it’s outdoors, social, and provides plenty of time for spectators to visit between plays, Segel noted. Compared to other sports, it’s relatively affordable, especially when it comes to local games, and you can bring the whole family.

For the Segels, baseball has always been a family business.

Dan played first base for Aloha High School. He and his brother, Joe, co-founded the Knights in Aloha in 1990 and brought the team to the mid-valley in 2017.

Growing up in the Portland area, Kaden played ball with his friends and his younger brothers, watched Knights games and hung out at the fields with his father.

“Every day, I was around baseball,” Kaden said. “It was how I grew up. It was baseball everything.”

It was only natural, Kaden said, that he take up the game himself - “Instead of sitting in the dugout, I’m out there playing now,” he explained - and LBCC’s team was part of what drew him to the community college.

“It’s a great program. There’s a winning culture here,” he said. Under coaches such as Andy Peterson, “I knew I was going to get better.”

Academically, Kaden said he appreciates the personal focus from instructors in classrooms populated with a lot fewer students than a standard four-year university. “It’s easier to get feedback,” he said.

For Dan Segel, LBCC was a chance to reset his academic career. He began at the University of Washington but “didn’t get it done,” he said with a shrug.

It’s been long enough that Segel doesn’t remember exactly who first suggested he enroll at LBCC. He remembers the baseball coach, Greg Hawk, then in his first years with the college, being persistent about bringing him in.

“He just said come on down, we’ve got a great program,” Segel recalled.

Indeed, he did - or would. Under Hawk, who coached from 1983 to 2013, the Roadrunners won six division titles and were champions of the Northwest Athletic Association of Community Colleges (NWAAC) in 1988 and 1991. The team made the NWAAC Hall of Fame in 2014.

Budget woes prompted the college cut baseball and women’s basketball in 2013, but college officials brought both back in 2015. Segel and several partners led the fundraising effort that helped make the difference, although he insisted credit be given to Greg Hamann, then LBCC’s president.

He did acknowledge the 18-month effort, however. “I felt I really reconnected with the college.”

As a student, Segel found the academic program at LBCC to be exactly what he needed. The class sizes were optimum for him. Teachers checked in on him and made sure he was staying on target. He’s especially glad the community college later formed a dual-enrollment partnership with Oregon State University.

“It’s a great place to grow,” he said of LBCC. “I recommend it all the time.”

The Roadrunners’ field has undergone some changes since those days, he said. The field is now made up of turf, not grass, and a barn and scoreboard have been added.

What hasn’t changed is the game itself - nor the spirit both he and Kaden hope to bring to spectators and teammates at Roadrunner and Knights games.

For Kaden, one major draw is “the community you get through baseball. You meet a lot of new people. You make connections everywhere.”

For Dan, it’s the offer of an all-ages summer outing for the whole community to enjoy.

“The (Knights) brand promises a beer and a ‘dog, right?” he said. “And we deliver on that.”

The Corvallis Knights’ season opener is June 17. On June 21, the LBCC Foundation will sponsor the game and give away three $1,000 scholarships to LBCC. One from the Foundation, one from Ram-Z-Fab, and one from Segel. Fans are invited to come enter for a chance to win, and all students with valid student identification get in free. For more information about the game, vist the LBCC website.