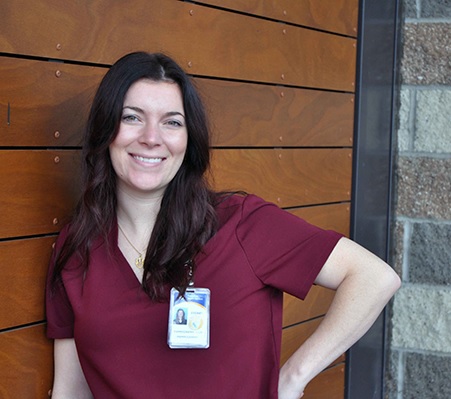 Sydney Kasner was working at a bank in Lincoln City when she started taking stock of her long-term plans. She wanted more growth and mobility and decided it was time for a change in careers. Kasner knew she wanted to work in the medical field, and felt especially called to positions that focused on patient interactions, not interventions. That’s how she found LBCC’s Diagnostic Imaging program.

“I started researching online and found four community colleges in Oregon that had this program,” Kasner said. “LBCC appealed to me the most initially because you could stack your classes to as little as three days a week - I did four - so the schedule wasn’t super rigid.”

What really convinced Kasner to choose LBCC however, was the great interactions she had with the faculty before she even officially enrolled.

“I called all of the schools. When I called LBCC I got the director’s phone number and she directly answered all my questions,” Kasner said. “She took several phone calls from me; I was surprised because she’s a super busy lady.”

Kasner knew she would have to commute from Lincoln City three times a week no matter which institution she picked, but looking back she remarked that her conversations directly with Program Director Jennifer Clayton sealed the deal.

LBCC’s state-of-the-art Healthcare Occupations Center, where Kasner and other healthcare students would attend their labs, had just opened. Kasner was looking at a two-hour commute just one way to reach that building.

“Coincidentally, there was another Lincoln City student they introduced me to during our first week so we decided to carpool,” Kasner said.

Kasner not only had to commute to Lebanon, she also had an externship at Good Samaritan to juggle. Diagnostic imaging students must work a minimum number of hours in a healthcare setting before they can be licensed. Feeling up for a challenge, Kasner dove into working at a hospital straightaway.

“I feel like when you jump into the hardest possible situations like that, you’re kind of prepared for anything” Kasner reflected. “Even now, when I think about any stressors I have, I remind myself I worked at a hospital back then and made it work.”

“I think I always had the capability to be a leader,” Kasner said. “I was always drawn to that role, but the program enabled me to be my best self. The opportunities they provided me just changed my world. I started by raising my hand to be the president of our little rad-tech club. If you want to grow and want to be an inspiration to other people you can, you just have to apply yourself and just say yes to things you are able to.”

Kasner received multiple scholarships during her time at LBCC, including the Vietnam Veteran’s scholarship, something she notes she didn’t think she would be able to do or even be eligible for until she started applying.

“People will often assume they won’t get financial aid and that’s not the case, so definitely utilize that resource,” Kasner said. “The foundation was a great resource for me.”

Kasner now works as a mammography tech in Lincoln City. She noted that her ability to do other tasks such as X-Rays - something all Diagnostic Imaging students learn - really helps at a smaller hospital and has made her a valuable employee due to the smaller labor pool.  She noted that rad techs like herself “are often the most upbeat” at hospitals, and with good reason.

“I love my job,” Kasner said. “It’s like everything I wanted; sometimes I sit at my desk and think ‘wow this was worth all those hard days.’”

Kasner noted that while it can be intimidating to forge a new path for yourself when thinking long-term about your future, it’s well-worth the time and effort.

“I would reassure students that there are going to be other students in the exact same situation as you.” Kasner said. “We had many people in the program who had kids, who were over the age of 50, who were going back for second or third professions… so, don’t discredit yourself or disallow yourself an opportunity to grow because of fear. Just jump in."