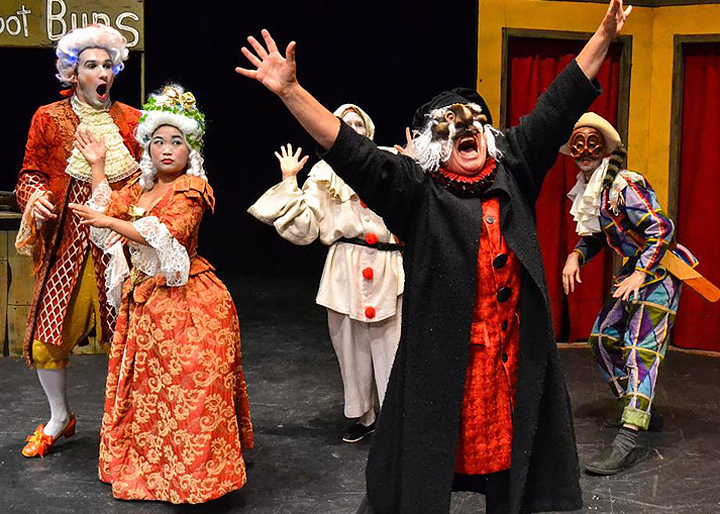 Linn-Benton Community College Performing Arts was chosen to perform “I Got Guns” at the Kennedy Center/American College Theater Festival Regionals held at the University of Oregon in February.

Written by LBCC Theater Director Dan Stone, “I Got Guns” examines political viewpoints and gun issues with a huge helping of hilarity. Created in the improvisational slapstick-style of Commedia dell' Arte, the play makes fun of extreme conservatives and liberals alike.

Twelve LBCC theater students will give two performances on Feb. 20 at the festival. LBCC’s theater has also been invited to perform the play at Mt. Hood Community College January 19.

About Dan Stone: Dan received his Bachelor of Arts degree with a double emphasis in Acting and Dramatic Literature from California State University, San Bernardino. He completed his Master of Fine Arts degree at Humboldt State where his focus was directing and creating original works. Dan was fortunate to be personally mentored for three years under Dr. Ron Argelander, founder of the Experimental Theater Wing of New York University.

About LBCC Theater: The Theater program at Linn-Benton Community College is dedicated to and focused on using the arts to serve the communities in Linn and Benton counties. Through Touring Children’s Theater and the Annual Children’s Play, LBCC Theater provides opportunities to engage young audiences in the arts and allows LBCC students a hands-on, dynamic learning experience. LBCC Theater’s emphasis on Community Engaged and Devised Theater provides the student an opportunity to explore and experience one’s community more fully, create partnerships within the community, and produce a collaborative creation that both values the citizenry of the district and empowers the community to connect through story-telling and the arts.